The Engagement Game by Joi-Marie McKenzie

Ambitious, confident, and successful, Joi-Marie believes she has it all figured out. At 28 years old, she has an enviable job as a producer, covering entertainment in New York City. Her close-knit family is loving and encouraging, and her boyfriend, Adam, is as close to perfect as you can get — except for the fact that he won’t propose.

Like most women, Joi-Marie has a checklist of what the perfect life looks like. She has the career, the friends, the apartment, and the lifestyle she has always wanted. But, when the husband she wants doesn’t fall into place, she decides to play the game-the engagement game-in order to get Adam to drop down on one knee. 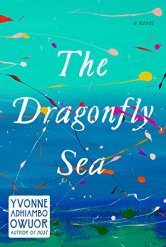 On the island of Pate, off the coast of Kenya, lives solitary, stubborn Ayaana and her mother, Munira. When a sailor named Muhidin, also an outsider, enters their lives, Ayaana finds something she has never had before: a father. But as Ayaana grows into adulthood, forces of nature and history begin to reshape her life and the island itself–from a taciturn visitor with a murky past to a sanctuary-seeking religious extremist, from dragonflies to a tsunami, from black-clad kidnappers to cultural emissaries from China. Ayaana ends up embarking on a dramatic ship’s journey to the Far East, where she will discover friends and enemies; be seduced by the charming but unreliable scion of a powerful Turkish business family; reclaim her devotion to the sea; and come to find her own tenuous place amid a landscape of beauty and violence and surprising joy. Told with a glorious lyricism and an unerring sense of compassion, The Dragonfly Sea is a transcendent story of adventure, fraught choices, and of the inexorable need for shelter in a dangerous world.

Shuri: The Search for Black Pantha by Nnedi Okorafor

The world fell in love with her in the movie. Now, the Black Panther’s techno-genius sister launches her own adventures – written by best-selling Afrofuturist author Nnedi Okorafor and drawn by Eisner-nominated artist Leonardo Romero! The Black Panther has disappeared, lost on a mission in space. And in his absence, everyone’s looking at the next in line for the throne. But Shuri is happiest in a lab, surrounded by gadgets of her own creation. She’d rather be testing gauntlets than throwing them. But a nation without a leader is a vulnerable one – and Shuri may have to choose between Wakanda’s welfare and her own.

Azalea “Knot” Centre is determined to live life as she pleases. Let the people of West Mills say what they will; the neighbors’ gossip won’t keep Knot from what she loves best: cheap moonshine, nineteenth-century literature, and the company of men. And yet, Knot is starting to learn that her freedom comes at a high price. Alone in her one-room shack, ostracized from her relatives and cut off from her hometown, Knot turns to her neighbor, Otis Lee Loving, in search of some semblance of family and home.

Otis Lee is eager to help. A lifelong fixer, Otis Lee is determined to steer his friends and family away from decisions that will cause them heartache and ridicule. After his failed attempt as a teenager to help his older sister, Otis Lee discovers a possible path to redemption in the chaos Knot brings to his doorstep. But while he’s busy trying to fix Knot’s life, Otis Lee finds himself powerless to repair the many troubles within his own family, as the long-buried secrets of his troubled past begin to come to light.

Set in an African American community in rural North Carolina from 1941 to 1987, In West Mills is a magnificent, big-hearted small-town story about family, friendship, storytelling, and the redemptive power of love.

This is the start of my 2019 TBR list. What will you read this year?